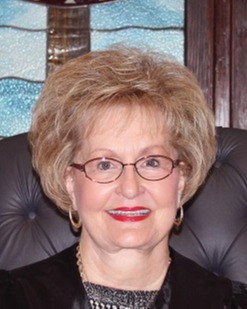 The Honorable Judge Diane Hallman, 79, of Baxley, passed away on Wednesday, January 25, 2023, at Wayne Memorial Hospital after an extended illness. She was born in Eustis, Florida on December 22, 1943, to the late Christine Pickren Reed and Harry Reed. She grew up in Baxley and graduated from Appling County High School in 1961. She was a loving mother and grandmother, a faithful member of Harvest Chapel Church, and an honorable public servant.

Judge Hallman was first elected Appling County Probate Judge in 1976 and would go on to serve over forty-four years, becoming the longest-serving elected official in Appling County’s 205-year history. What began as a way to earn a living for her family became a lifelong passion and ministry. Judge Hallman’s four-plus decades of service saw much change come to the area, but she was steadfast in her service to the community that she loved so much. Judge Hallman was simply “always there,” and she was always ready to help whoever came through the doors of her office. She leaves behind a tremendous legacy.

She is preceded in death by her niece (who was more like her sister) Barbara Ann O’quinn White, her sisters Jackie Smith Austin and Hazel Smith O’quinn, her brothers Orville C. Reed and Johnny Smith, her granddaughter Charity Crosby, and her great-granddaughter Addie Hayes.

The funeral service will be held on Sunday, January 29, 2023, at 3:00 P.M. from Harvest Chapel with Pastors Agnes and Randy Sellers and Jacob Bell officiating.

Interment will follow in the Friendship Congregational Christian Church Cemetery.

The family will receive friends one hour prior to the service at Harvest Chapel.

Active Pallbearers are the members of the Appling County Sheriff’s Department.

In lieu of flowers and food, donations may be made to Addie’s House of Hope 305 Holmesville Ave, Baxley, Ga 31513

Nobles Funeral Home and Crematory is honored to serve the family of Judge Diane Hallman.

To order memorial trees or send flowers to the family in memory of Diane Hallman, please visit our flower store.